After a rather wet and blustery weekend at the International Mini Meeting in Bristol, we are hoping for better weather for the remaining events that we are participating in as we continue to celebrate Mini60.

Next up is the Kent region’s annual Ham Sandwich Run on Sunday 18 August, quickly followed by the 60th Anniversary Diamond Mini Tour to Shelsley Walsh via Longbridge on Sunday 25 August.

Then it’s on to the Stanford Hall Mini Fest 2019 on Sunday 15 September where the Warwickshire region will be representing the club.

One event that isn’t dependent on the weather is the annual Lancaster Insurance Classic Motor Show at the NEC from 8-10 November where, again, the club will have a display.

Speaking between the showers on the final day of the IMM, regional organiser David Dangerfield said:

” A large number of members dropped by the stand from across the UK/Ireland, Australia, New Zealand, Thailand, USA etc. One of my gazebos was literally blown away yesterday, but the MCR gazebo, with a constant 4/5 members anchored to it, survived and acted as a welcome shelter today – so thank you to all those members who helped.

I spoke with a number of ex-members who will be rejoining and a number of others who will join in the near future. Also a big thank you to all those members who camped and helped each other when the weather was terrible and kept the smiles and laughter going. 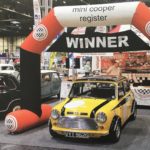