Members of the region live in the geographical county of Warwickshire, stretching from Atherstone in the north (by the A5) through Stratford-upon-Avon and the North Cotswolds in the south to the A40. 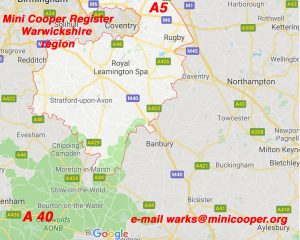 Members own a variety of Minis from concours to competition. Some compete in MSA authorised events, including Hillclimb events at Prescott. Matt and Andy Clarke are adopted members of the region who regularly compete at Prescott and other hillclimb venues.

Meetings
Finding a venue to meet the needs of a large geographical area area is not easy, especially with traveling during the winter months. From January 2020, meetings will be held on the fourth Wednesday* of the month starting 7.30pm at Caffeine and Machine, The Houndshill, Ettington, near Stratford upon Avon CV37 7NS.

*This will be the forth Tuesday from and including the April meeting.

At the first meeting, members will discuss future arrangements and venues.

There will be a continuing presence at the Prescott Breakfast Meetings and other events to be arranged during the year.