We are pleased to announce that the club is creating a new register.  For some time now the MINI Register has been growing (which is unsurprising as the cars are of course still in production) and it is now one of the largest we have.  The time has come now to divide this register into two sections and they are as follows:  First Generation Mini and Later Generation MINI.

You do not have to do anything as we will identify the cars that are currently on the MINI Register and move them into their correct locations. If yours is one of the cars affected please be patient while we create and split the cars into two groups.

David Young will continue his wonderful work as registrar of the Later Generation MINI and we have appointed a new registrar for the First Generation MINI who will introduce himself in the February edition of CooperWorld.

There are several reasons for this move but perhaps the most persuasive one is that on events throughout the year, we see many younger owners who have entered the Mini world with the 1st Gen cars.  Often, the younger owners see car clubs as purely an on-line activity but we want to encourage them to join us by providing a home for them within the MCR where they will feel welcome. 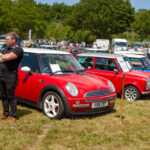