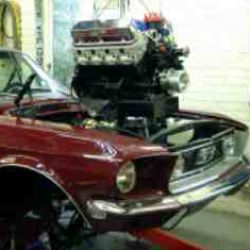 I've just had to replace a rear wheel bearing after 6 years and 8,000 miles, which I'm OK with as the car sits for long periods but does get used hard intermittently.

The old bearing was fitted during the full restoration and is a Timken tapered roller set with the built-in spacers.  It could have failed for one of two reasons:  I suspect I overtightened it, as there is a torque figure of 60ft.lbs given which, on reflection, probably refers to the original ball race design (although I don't think this was ever fitted to Coopers).  The inner track is worn and slightly coloured, as are the rollers.  When fitting the new bearing, 60ft.lbs felt a bit tight, some resistance to turning - so I backed it off to the next flat and the hub spins freely with no run-out.  I'm assuming to actually measure and shim between the spacers is not required.

The second point is that a small amount of water had clearly been getting into the bearing.  I had fitted the oil (grease) seal the conventional way around as per my manual.  This time I was using a different manual, which stated that the oil seal should be inserted backwards for the tapered roller setup.  I have never, ever heard of an oil seal being fitted with the spring exposed to the elements - is this really right?  Or did the early tapered roller kits come with a slightly different design of oil seal?  The bit that makes we wonder is that the oil seal that came with my new Timken kit only just reaches the oil seal land on the inner end of the stub axle - it might even miss it, letting water in.

I must admit that I have come across this what seems to be the odd idea of the seal being fitted with the spring side of the seal facing out towards the elements. It's stated in an old Haynes manual that I've got that it should be fitted that way around. I suspect it's a mistake in the manual that's some how filtered through the various manuals over the years.

When I replaced a wheel bearing on my Cooper S back in 1992 (a long time ago now!) the original seal the spring was on the inside (bearing side). I was following the said Haynes manual at the time and remember the confusion it caused. I fitted the seal with the spring on the inside, as the original I'd removed and didn't have any issues. I believe that the original S spec was roller bearings not ball races. The replacement I used was an old stock Timken bearing which was exactly as the original one. It has a seperate spacer in the middle.

As I'm now doing a nut and bolt rebuild of the same car, I recently bought a pair of new Timken roller bearings from Mini Spares and am now replacing both rear bearings. I dug out the same Haynes manual and memories of the confusing instructions came back. I think the spring should always be on the inside, not exposed to the elements. Unless anyone can advise differently?

The bearing on the other side I have never changed until now. It definitely has the spring on the inside, not facing the elements. It has done about 40,000 miles since I bought the car in 1985 and has never failed. It could possibly be the original factory fitted bearing, I don't know.

I suspect your bearing probably failed because some water got in past the seal.

I hope that helps,

Yes, I've fitted the accepted way around.  I have two Haynes manuals - one says the other way round, complete with a diagram of it the 'wrong' way round, the other just says 'fit oil seal'.  I wonder if the early tapered roller sets came with a different design of oil seal that was intended to seal further along the land, or something similar.