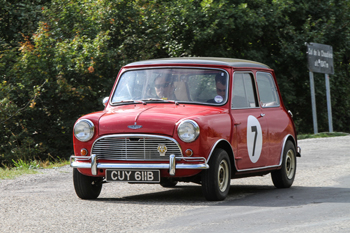 The Mk 1 Cooper S-Type as BMC initially termed it, was announced in April 1963 with an engine size of 1071cc. Using a productionised version of the well proven Formula Junior engine supplied by Morris Engines it was aimed primarily at the competition market and the S was soon a very familiar sight on the race tracks and with the rallying fraternity. Externally it looked very much like the 997cc Cooper except for the inset vented wheels (to assist with brake cooling) and an S badge on the bonnet and boot. Internally it was the same story with the 120 mph (or 200 kph for export cars) speedometer the only difference.

The 1071 only stayed in production until the end of August 1964 by which time it had been joined by the 1275 S (in February 1964) and the 970 (in June 1964). Although in production for little over a year some 4000 1071 cars were built. During that time there were relatively few changes to the specification of the car the main ones being introduction of a diaphragm clutch and positive crankcase breathing.

Despite being fifty years old a 1071 is still quick enough to keep up with modern traffic and still stops well enough so as not to feel like you are driving an antique. Obviously the noise and comfort levels are not up to modern standards but road testers were complaining about those when the cars were launched!

The 970 S was a very low volume production model, much lower than even BMC claimed at the time. Aimed at the 1000cc class for racing and rallying, 1000 had to be built to qualify for homologation and they never got as far as 970! Homologated for competition use from April 1964, production sort of started in June 1964 but an ongoing shortage of crankshafts meant that by the end of July they had only built twenty four. This problem was well known at the time, so much so that John Gott former BMC works driver and team captain wrote to BMC to tell them that its homologation could be withdrawn if they didn’t crack on and build some more. 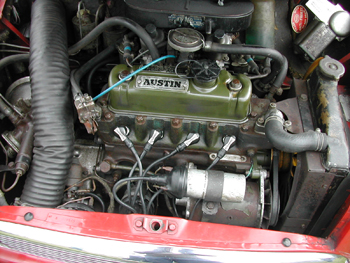 The 1275 S has long been seen as the ultimate S with its torquey engine and is currently still the most sought after version for most buyers and owners. Visually the same as the 1071 S, the 1275 was fitted with hydrolastic suspension along with the rest of the Mini range in late 1964. From early 1966 the extra fuel tank and oil cooler became standard items. If I had a £1 for every time someone has said all Cooper S’s had the extra fuel tank I’d have enough money to buy a right hand tank at today’s prices (about £300 for a good one).

The 1275 S remained in production pretty much unchanged until September 1967 when the Mk 2 version was launched. Despite people thinking that 1275 S’s were flying out of the showrooms as fast as BMC could build them the reality was rather different and there are Mk 1 S’s that were not first registered until as late as 1970. So, do not automatically assume a later registered Mk 1 is a wrong ‘un. In the UK G suffix registration numbers are not uncommon for a Mk 1 S.

Any Mk 1 Cooper S is a sought after beast these days and there are a lot of cars offered for sale where all is not as it seems. Before undertaking any purchase the novice buyer is urged to obtain a copy of Original Mini Cooper and S written by John Parnell. Although now some years old it has not yet been bettered as a buyers guide. I would suggest any potential Cooper S purchaser studies it very carefully and takes it with them when viewing a potential purchase. Carefully compare the detail in the book to the actual detail of the car you are looking at and if anything sets your alarm bells ringing check with the MCR if they know of the car. Caveat emptor.

To find out more please contact our MCR Registrar Help Desk, cars@minicooper.org. They will then deal with your enquiry either by responding directly or forwarding your enquiry to the appropriate registrar. Alternatively, details can always be found in the monthly club magazine, CooperWorld.