The event took place from 27th September to October 3rd 2014 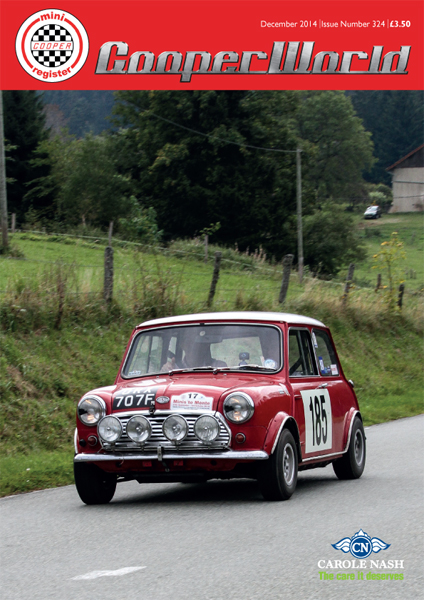 To mark the 50th anniversary of Paddy Hopkirk’s famous victory on the 1964 Monte Carlo Rally, 43 members of the Mini Cooper Register re-traced parts of his route to Monaco in September, on a 2,250 kilometres drive over many of the classic French roads used on that event.

Starting from Lenham in Kent, a location regularly used as a time control for British entrants on past Monte Carlo rallies, the week-long tour gave drivers a taste of motoring as it used to be on classic French roads uncluttered by the traffic and toll booths of modern auto routes. For co-drivers, a detailed road book compiled by organisers Robert Clayson and Peter Moss made navigation simple.

The oldest car taking part was a 1961 Mini Cooper and the youngest a 2012 MINI Roadster. Despite the advancing years of many of the Minis, reliability was generally good and a seasoned service crew was on hand in a well equipped van to help anyone who did get into difficulties.

After an overnight stay in Troyes the serious motoring began with a long haul south to Neuchatel, a control on the 1964 Monte Carlo Rally. From there the route led to Aix les Bains. in the foothills of the Alps, which was the base for two days of motoring in the region.

En route from Aix les Bains to Gap, cars and crews tackled the Col d’Espreaux, another Monte Carlo Rally special stage in the 1960s. After an overnight halt at Gap the Minis scaled the heights of the 1,607 metre Col de Turini, the steep and twisting sting-in-the-tail of every Monte Carlo Rally, with the tour ending beside the Mediterranean in Monaco.

The Mini Cooper Register ran its first Minis to Monte in 2004 and it is now a regular feature in the club calendar. “Our aim is to give classic and modern Mini owners the chance to drive their cars on some of these great rally roads,” said co-organiser Robert Clayson.

Below is the copy of CooperWorld report on the event also available are the Events Newsletters. By following this link all the documentation for the event is available. Click Here.