The Mini Super was launched with the Mini Cooper in September 1961. However, production of the 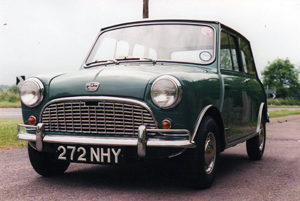 model started on the 7th June, a month before the Cooper. In some early BMC publicity material both the Super and Cooper were introduced as “Twins”, with the Cooper being described as the “Sports-car version of the Super”.

The Super was pure Cooper, both inside and out but mechanically equipped with standard 848cc engine, gearbox and braking system. Inside it had a standard gear lever but chromium plated and a black-faced 90mph speedometer. Outside the Super had a standard Austin or Morris grille which was embellished with extra chrome bars, and standard mini badging.

The Super was deleted after a very short production run, together with the Mini De Luxe, in October 1962, although a few were built for export in November.

The Super De Luxe which followed in October 1962 was really a De Luxe with a few Super/Cooper embellishments.

The Super is now believed to be the rarest of Mk1 Minis.

To find out more please contact our MCR Registrar Help Desk, cars@minicooper.org. They will then deal with your enquiry either by responding directly or forwarding your enquiry to the appropriate registrar. Alternatively, details can always be found in the monthly club magazine, CooperWorld.’