Mini Sports Cara Jackson reports on the final round of this year’s competition.

Sunday 22nd September saw nine Mini Sport crews gear up to compete in the Ford Parts Cheviot Stages Rally for the Final Round of the 2019 HRCR Mini Sport Cup.

Competing over the course of 13 stages on the notoriously difficult Otterburn Ranges, the Mini crews had honours to battle for, with pole position in all the Classes still up for grabs.

Despite the previous announcement that the Mini Sport Cup victory for 2019 had already been claimed by Clive King and Anton Bird, under closer examination it was soon realised that due to the bonus points available on Flanders, the title could be stolen by Clive’s son Craig King!

Realising the Championship win was still within reach, Craig, teaming up with Clare Jennings for the Cheviot was ready to give it his all on the rally. With the very short time between Flanders & Cheviot – just 2 weeks, Craig only had time to give the Mini a quick check over, being forced to deal the previous issue that the car was unable to rev past 6000rpm.

Fresh with the knowledge that his son Craig could take the Championship from his grasp, Clive King, teaming with Anton Bird needed to win their Class, or at least bag 2nd to beat Craig’s score on the Championship leaderboard.

With the water leak from Flanders cured with a new Water Pump and a full check over of the Mini, Clive andAnton got off to a confident start. Stage 1 went smoothly, with the exception of a ‘moment’ where the Mini ended up on two wheels as the crew hit a hole on the inside of a left handed bend! A little shaken from the stunt driving that had ensued, Clive and Anton quickly settled in to their usual fast-paced, top-notch rallying, the next three Stages running smoothly, finishing top of Cat 1, securing the Championship for definite this time!

We are so appreciative of all the crews who competed this year, and we hope to see you again in 2020!

The Yokohama prize of two regulation tyres, used throughout the Championship, was awarded to Clive King, won the 5L of Penrite Classic Mini Oil & the Questmead prize for best improvement on seeding was awarded to Jack Hartley, with Craig King winning the Snap-On Prize!

Although the 2019 HRCR Mini Sport Cup has drawn to a close, it is only two weeks to go until Mull Rally – a favourite event amongst our crews and many of our Minis have entered.

Thank you to the generous sponsors of the HRCR Mini Sport Cup – Mini Sport, Mintex, Yokohama, Penrite and Questmead – without whom there wouldn’t be a Championship. 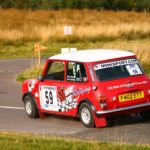 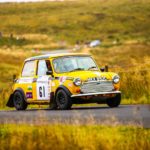 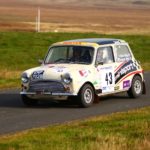 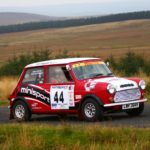