New for our 2019 calendar is the JD Competition Tyres Bob Shaw Memorial Brawdy Stages Rally, covering eight miles of smooth, yet erosive, surfaces for each run, our crews had six stages to complete, writes Cara Jackson of MiniSport.

With only seven of our Mini teams registered, many of our crews tried to get a run on the rally, but left it until after Down Ampney to enter, and it was full with 14 reserves. Well received by those who competed, Brawdy Stages gave our crews nearly 60 Stage miles for just the £200 entry fee, which may be why it filled so quickly!

The warm and dry weather caused brake overheating issues for many of our crews, despite being overcast!

Regrettably, Roy Jarvis & Luke Greaves were the first crew forced to retire from the event in Stage 2, when absolutely flying at 100mph, they braked – causing the front hub assembly to part company with the Mini!

It was also a truly tragic end to the rally for Ken Pryce & Don James, who had been on to a winner, despite having a damper pin break – by chance, Clive had a spare, which got the crew back out. Leading the Minis, right up until the very last stage, when a mere three corners in, they were struck down with complete transmission failure, halting their impressive run!

Tormented from the 1st Stage with boiled brake fluid, this set the tone of the rally for Craig King and Adrian Lloyd – with this occurring on every stage! Things went from bad to worse on the penultimate stage, where the crew completely lost the brakes whilst flat out in 4th gear on the approach to a very tight chicane.

Knowing that they had absolutely no chance of making it through & thinking fast, Craig decided to risk sliding it on the hand brake, unfortunately, they were going too fast which resulted in hitting the tyres – breaching the Mini in a field!

Peter Ellerby & Colin Tombs had a strong run, with the Mini never missing a beat, the service crew didn’t have to put a spanner to it all day! The only issue the team faced was that Colin was unwell, suffering with whooping cough, it made it extremely difficult for him to read the pace notes for Peter, due to his constant coughing.

Credit where credit is due though, having made the lengthy journey down from the North East to compete, Peter & Colin finished 2nd in Class and 2nd Mini overall.

Clive King & Anton Bird were plagued with braking issues from the off, being forced to bleed the brakes in first service and finding that they had been so hot that even the rubber covers on the ball joints had burnt!

Brake issues eventually over, there was the opportunity for Clive and Anton to get on the attack but, although still 26 seconds behind their rivals, going in to the final stage, they went on to take 1st Mini overall.

Clive and Anton are now joint leaders of the 2019 Championship, tying with Jack Hartley and Gary Dawes on 105 points each (equivalent to 3 maximum scores).

Thank you to the generous sponsors of the HRCR Mini Sport Cup – Mini Sport, Mintex, Yokohama and Penrite & Questmead, without whom there wouldn’t be a Championship. 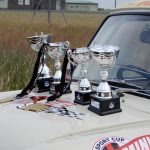 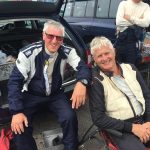