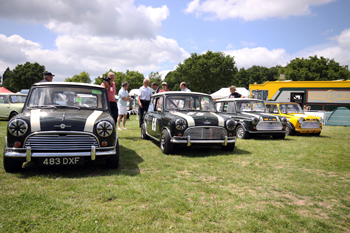 The Ex-Works and Competition Car Register caters for the rarest of all Minis, that of Ex-Works cars. These are defined as those built and on record as having been campaigned by the world famous BMC/BL Competition Department at Abingdon, Berkshire, the home of the MG Car Company. There were but 71 Works Minis built and used over a short ten year period from 1960, to the Competition Department closure by the short sighted and penny pinching Lord Stokes in 1970.

The British Motor Heritage Museum at Gaydon houses the three most famous Monte Carlo winning Mini Cooper Ss, however, most Mini enthusiasts will be aware of the many other rallies and motor racing championships that were won by Mini Coopers in the glorious 60s. The whereabouts of nearly all of these wonderful and unique cars are known to the Club’s Registrar. Some of these cars have been traced and carefully restored by fortunate club members, keen to maintain these historic cars for posterity. Some however are mothballed in private collections for the sole enjoyment of their owners. Fortunately, a good number of these quite unique cars are owned by Mini Cooper Register members who frequently display their cars at our National Day at Beaulieu for all to see, under the banner of the Ex-works & Competition Car Register. These cars are highly prized and very valuable. 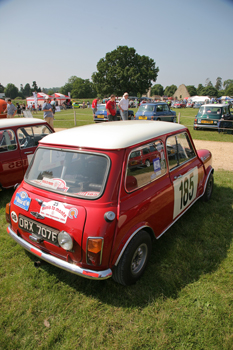 Due to the finite quantity of these rare Works cars, some members have gone to great lengths, and not a considerable expense, to built replicas of their favourite Works car, perfect in almost every detail and in many cases presented to be indistinguishable from a genuine Works car – apart from that coveted and easily recognisable Berkshire registration plate. These are often displayed along side the Works cars and are a credit to their fastidious owner. These cars are essentially brand new Works Minis and the level of research and detail that goes into building one of these cars should never be underestimated. The knowledge gained by these Register members is encyclopaedic and can be called on by others trying to achieve the goal of building and owning one of these superb cars. There are some stunning examples of these Works replicas within this Register.

Works Race cars, as campaigned by the Works Cooper Car Company Team and those from Abingdon, also feature in this register. These cars are fewer in number as many have disappeared over the years, although several do appear and are displayed at our Beaulieu National Day. These days, with the upsurge of Historic racing, the Club’s Appendix K Register caters for those car currently competing on the race circuits at home and abroad.

The Register now also encompasses Competition Cars. These are cars that have a known Competition history but perhaps are not built to the same specification as the Works race or rally cars. They are generally cars that are actively used in competition today be they in historic rallying or racing. 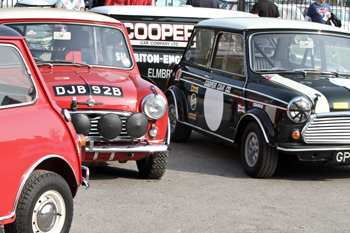 Anyone with a suitable car is most welcome to join this most prestigious of Registers.

To find out more please contact our MCR Registrar Help Desk, cars@minicooper.org. They will then deal with your enquiry either by responding directly or forwarding your enquiry to the appropriate registrar. Alternatively, details can always be found in the monthly club magazine, CooperWorld.