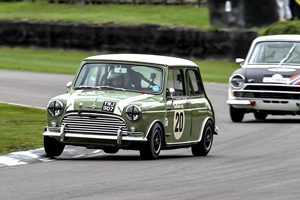 The first Mini Cooper and Cooper S models were introduced in 1961 and 1963 respectively very much with competition in mind and had a gloriously successful impact upon motorsport around the world. Subsequent models such as the Rover Coopers and BMW MINI Coopers have also been successfully used in competition. It is appropriate therefore that the Mini Cooper Register has as one of its basic precepts that the register will encourage participation in the sport by its members using their Mini Coopers.

There are opportunities for sporting enjoyment of Mini Coopers for all models manufactured from 1961 onwards, taking into account the advancing age, rarity and value of some of the earlier models. 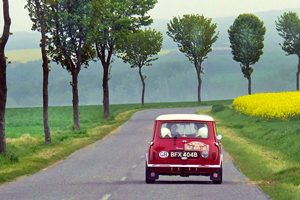 Although not strictly competitive in nature, organized road runs (or touring assemblies) are popular with MCR members as they represent a way to have fun in their cars without the risk of damage or undue expense. The Minis to Monte series of runs covered in detail elsewhere in this website is currently the best known but other runs in the UK have been organized in Wales, the Midlands and elsewhere including a trip over to France for a weekend run. No special paperwork, licences or preparation are needed for entry to road runs but organisers should be aware that they will need to obtain a waiver of permit for any event which traverses the UK. Contact the Competition Secretary for details. 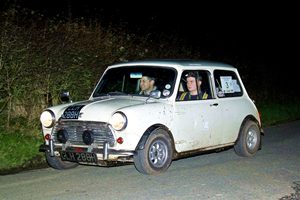 MCR members have organized some excellent 12 Car Rallies over the past twenty years including the Northumberland Borders Rally (now a Clubman status navigational rally), the Downs Rally and the Fosse Rally. These events require some minor car preparation by competitors, special insurance cover and the issue of a permit to the organizing club. The Competition Secretary should be kept informed of any plans to organize such an event as he or she is the main point of contact with the Motorsports UK who have statutory control over most motorsport events run in the UK. Competitors generally get an evening of competitive driving and navigating on public roads at a maximum average speed of 30mph. Twelve Car Rallies are excellent events on which the novice navigator or driver can gain experience. 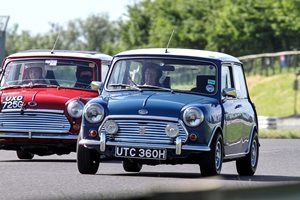 Almost since the inception of the register a Coopers at Combe day has been organized at Castle Combe racing circuit in conjunction with other motor clubs. Again requiring little car preparation, track days are a popular way of allowing MCR members to try out their road cars in a relatively safe environment free of public road speed limits and traffic density. As with all motorsport events an entry fee is required to cover administrative and other costs. In the past Curborough Sprint Circuit was also used for track day sessions and more events of this type may be organized in the future of there is demand. 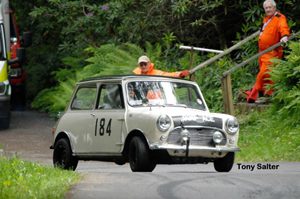 Although in the past very much an individual pastime, sprints and hillclimbs are good ways of developing competitive driving skills in a regulated environment. With only one car on the track at a time full concentration can be given to driving lines, braking points and car control. Venues such as Gurston Down offer one off hillclimb events and the Midland Speed Championship has been successfully competed in my MCR members. Cars can be in any state from road going to specials depending upon event or championship regulations. 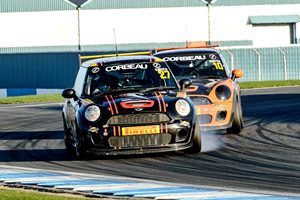 The ever vibrant Mini Racing scene has had successful involvement by MCR members over the years. Both Mighty Mini series and Historic Racing have been enjoyed by the membership and their many spectators. There is an active series for the new Mini which is also supported by MCR members. Racing requires a totally prepared car and specialist equipment which involves at least a degree of expense and may require a great deal of expense to become competitive. Experience of racing is also helpful. However there is only one way to start in the sport, and that is to start going to races. Spectating, marshalling and then competing is the traditional path into the sport. There is considerable experience of racing within the MCR which a novice member may be able to access with help. Members should contact the Competition Secretary for more information. 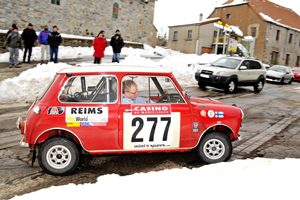 Broadly falling into two categories stage rallying and road rallying, the sport of rallying has been the natural home of Mini Coopers since 1961. In the past members have competed in both disciplines both in the UK and abroad. Rallying needs a degree of specialist car preparation, depending upon the type of event being entered, and experienced advice is helpful before any money is spent. MCR members have competed in the Motorsport UK Historic Rally Championship the Rally GB and other international rallies including the Rallye Monte Carlo Historique. Members should contact the Competition Secretary for more information if contemplating starting in the sport. The club’s Newcastle and Durham region organise the excellent Northumberland Borders Rally, a Clubmans status navigational rally. 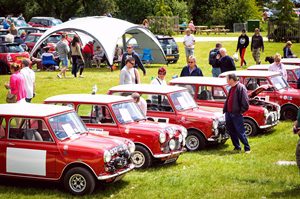 Past masters in the art of competition car display, the Ex-Works and Competition Car Register of the MCR, has put on some superb static displays in the past including at the Race Retro shows, at Silverstone Circuit events and at Beaulieu. Dynamic runs of ex-works and competition cars are less common but have been staged by individual MCR members at Chatsworth, Rally GB, Goodwood Festival of Speed and other venues. Not competitive in nature these dynamic runs are nevertheless highly entertaining and allow the public to see these valuable historic cars in action.