The weekend of 18/19th May proved a busy one for MCR members with the 25th Spring Autojumble taking place at Beaulieu over both days and the London to Brighton Rally on Sunday.

Rover Cooper Registrar John Parnell had spent many weeks assembling a display of 58 vehicles to celebrate the Mini’s birthday, ranging from an early 1959 model to one of the last to be produced at Longbridge in September 2000.

On Sunday, Events Co-ordinator Justin Ridyard and his team were manning the club stand, in association with our sponsors Mini Sport, on Madeira Drive, Brighton to welcome the drivers on their arrival from London. Included in the display was a MINI that had made the journey from Edinburgh.

Many thanks to all the car owners and helpers who gave of their time to fly the flag for the club. 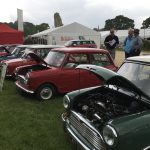