Hi All
Does anyone know what happened to the British Mini Company, Newport, Gwent or are they still in existence?
I have found some interior samples of carpet & other trim items I collected from the late nineties that are just spot on to the original trim fitted to the early Mini Cooper/S.
In particular the carpet sample I have is for a MKII in black which can be described as looking like the finish on a pig skin dartboard adhered to a felt/jute underlay, the cost of the complete carpet set then was just £129, wishing now I bought a set at the time.
I would upload a photo of the carpet sample but I am just struggling uploading at the moment.
Any comments?

Unfortunately they are no longer in existence as I also found their trim better than newton stuff, my recliners are fitted with covers from them and I also wish I had bought a carpet set from them,

Further to my recent post ref. BMC, attached is a photo of the carpet sample I mentioned. 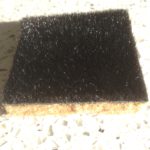 BMC got fed up with making trim for Minis and got into Jags, they eventually became BRS International who are still trading.

I've still got some of their carpet, which was sooo much better than the current fitted horrid Newton stuff. We did discuss this some years ago and I think Jonny explained how modern manufacturing processes didn't allow for the old type of carpet so similar to the original.

I think what Pete meant was that the British Mini Company became [url=http://www.car-hood.co.uk/]BAS International[/url] They got out of the Mini scene as it was devoured by Newton. I agree their products were much better, they can still supply their replacement flock carpet, but only in Black & have no interest or intention of getting back into the Mini game.
M