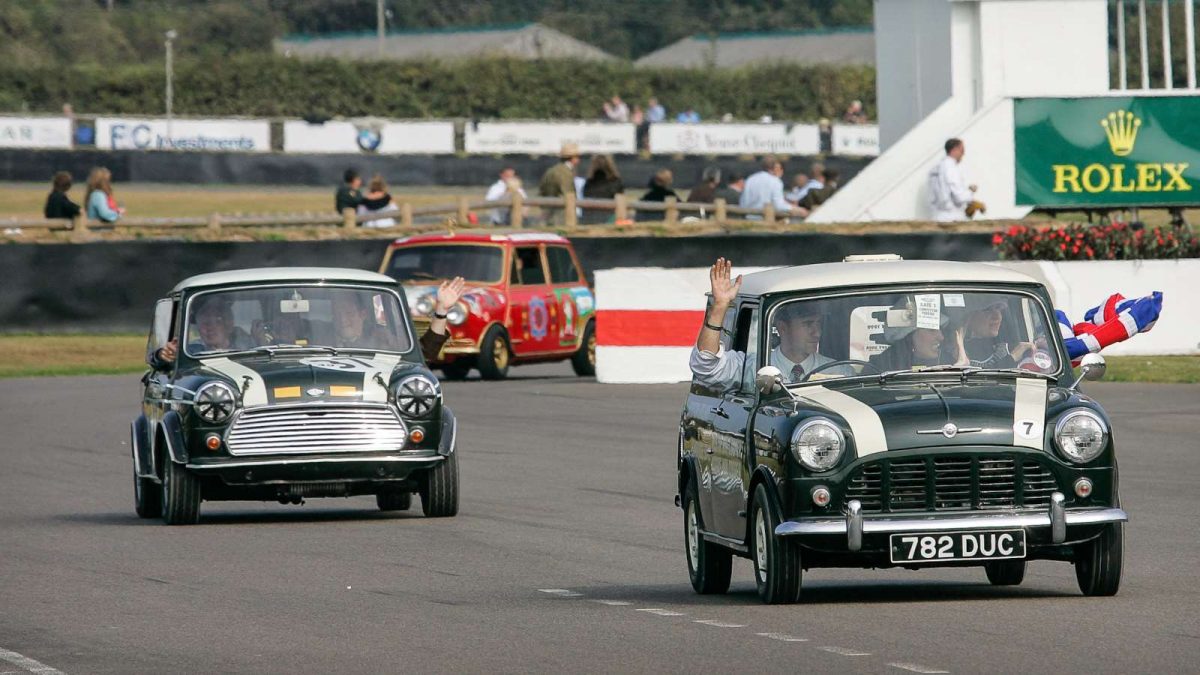 In the late 1940s, a family-run firm was founded in a small garage in Surrey. Little did that family know that business would go on to be one of the most significant motor manufacturers in British history.

Sixty years after the company’s triumph in the Formula 1 World Championship, Goodwood will pay homage to the Cooper Car Company with a jaw-dropping cavalcade of its best machines at this year’s Revival over the weekend of 13-15 September.

John Cooper, along with his father Charles, started work in their Surbiton garage by building 500cc Formula Three cars. With the driver placed in front of the engine for practicality reasons, the seeds had been sewn for what would become the future of single seater motor racing.

The Cooper 500 soon drew the attention of the racing fraternity, and future stars such as Stirling Moss, Peter Collins, Ken Tyrrell and Bernie Ecclestone all came knocking at the Cooper door. Cooper soon became the go-to specialist manufacturer for privateer racing teams, dominating the world of Formula 3 between 1951 and 1954. Fast forward just five years and the Cooper works team, with Jack Brabham at the wheel of a Cooper T51, won the Formula One World Championship in both 1959 and 1960, the T51 becoming the first rear-engined car to do so.

After a degree of success at the Indy 500, rival manufacturers overtook Cooper over the coming years. Following the death of Charles Cooper in 1964, the team departed the world of Formula 1 in 1969.

The most famous connection for Cooper, however, is arguably that with the Mini. John Cooper’s development of the diminutive British saloon, originally built for the road, dominated saloon car racing and rallying throughout the 1960s, and took famous victories at the 1964, 1965 and 1967 Monte Carlo Rallies. The Cooper name is still very much involved with Mini to this day, and the company John Cooper Works, originally founded by John’s son Michael in 2000, produces parts and accessories for the BMW MINI.

“I am absolutely thrilled that Goodwood has decided to honour my father and the team 60 years on from securing its first World Championship,” said Mike Cooper, John Cooper’s son and Mini Cooper Register Honorary President.

“It’s extra special that the celebration is being held at Goodwood, as the Cooper family holds the distinction of being the only fourth-generation family to compete at Goodwood. My Grandfather, Charles, raced 500 F3s, my father raced 500 F3s and Formula 2 cars, while myself and my son Charlie have both competed in the St Mary’s Trophy in 2009 and 2018 respectively.”

“It will be a truly fitting occasion to look back and celebrate the past 60 years of Cooper.” 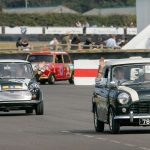 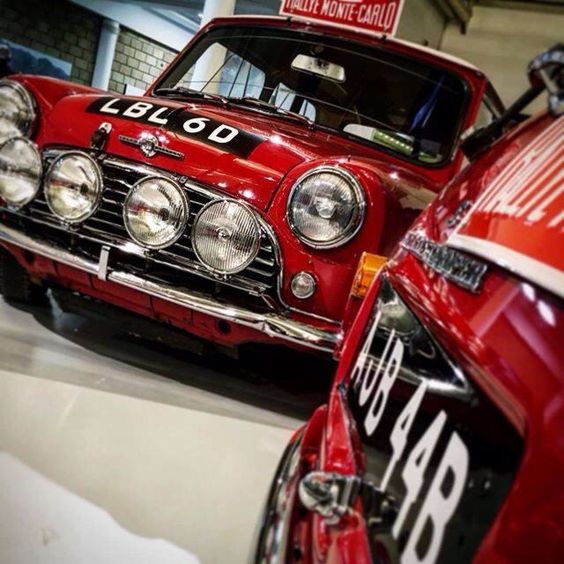 To add to the Mini60 birthday celebrations, the British Motor Museum, home of the three Monte Carlo winning cars, has put on a new display on the mezzanine floor of its Gaydon headquarters.

Until recently, the area was occupied by a display featuring some of the cars from TV’s Car SOS programme, but now all the Museum’s Minis are in one place for everyone to see.

The venue will be host to the annual National Metro & Mini Show on Sunday 4 August at which the club’s Warwickshire branch will be having its own display of 20 cars from across the range outside the museum entrance. 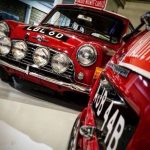 It is just over two weeks until the 25th Beaulieu Spring Autojumble and preparations for the club’s display to celebrate Mini60 are nearing completion.

So far, we have 55 cars taking part from one of the earliest 850cc models produced in 1959 right up to the very end of production in 2000, and a kaleidoscope of factory colours, some of which are rarely seen today.

Amongst those on display are ex-works cars, a Mini Cooper police car, two coach-built Radfords, one of them a rare Traveller version and the other the 1966 BBC Adam Adamant TV series car, which was featured in the recently-published Mini World anniversary bookazine.

Also, we have a complete cross-section of Mini Coopers from the 1960s, 1970s and 1990s, Mini vans and pick-ups, a Riley Elf and an Italian Innocenti Mini Cooper.

Club organiser John Parnell said “My event email inbox has been very busy and everyone has had personal replies.”

“There has been a lot of enthusiasm for this display and it is a pleasure to promote the whole weekend as a destination event that will entertain on multiple levels.”

All those taking part will receive a memento of the event from the National Motor Museum.

For more event information and how to book tickets go to https://www.beaulieu.co.uk/events/spring-autojumble/

Mini Cooper Register Warwickshire region will again have a stand at this annual event organised by the British Mini Club at Stanford Hall in Leicestershire.

Make a note of the date which is Sunday 15 September.

The event runs from 10.00am to 4.00pm and club members looking to join the display should email jfilor@talktalk.net

Tickets cost £10 (free for children under 12), discounted for BMC members and exhibitors. 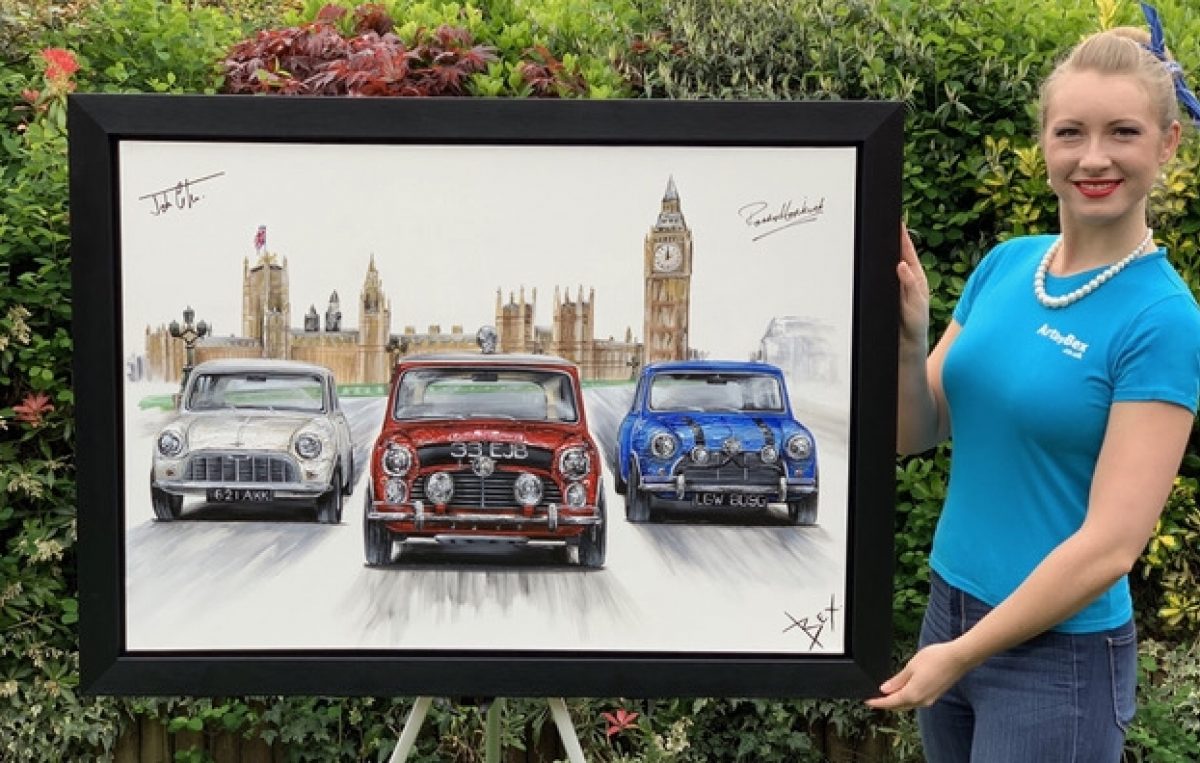 Artbybex has announced her latest addition to the range of paintings based on the iconic Mini which has been produced in collaboration with Paddy Hopkirk and our club president Mike Cooper.

The limited edition has been signed by both and details are available at https://artbybex.co.uk/60th-mini-anniversary-art-by-bex/ 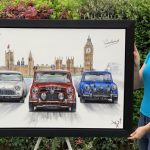 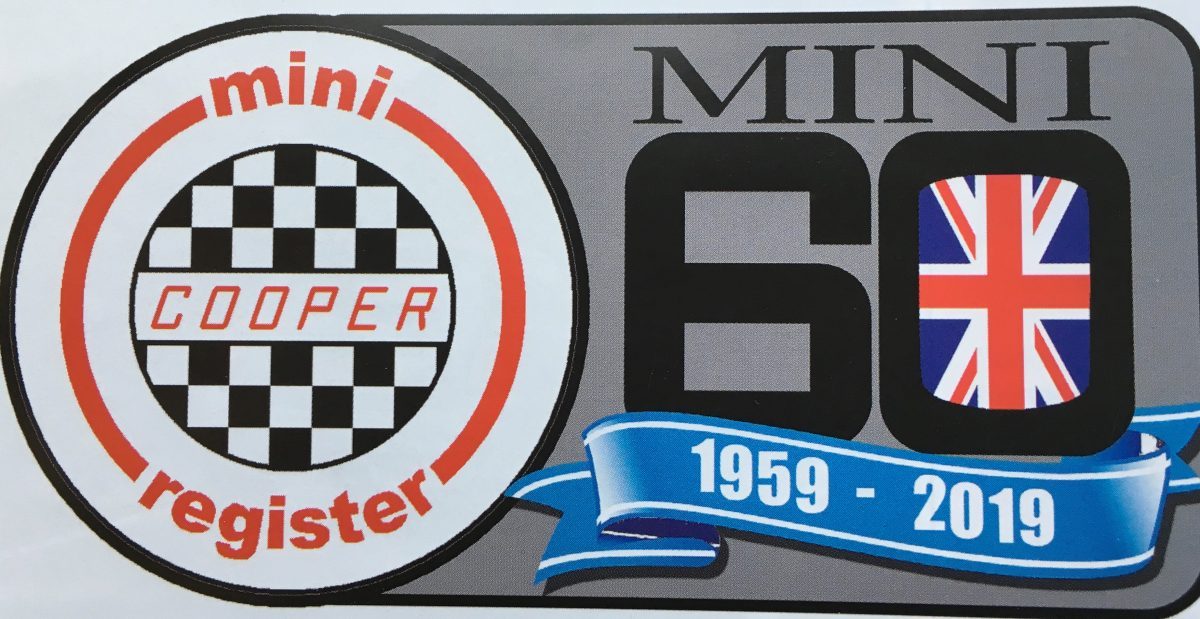 Regional Co-ordinator Richard Sign has announced the launch of the club’s latest region on the Isle of Wight.

Meetings will take place at 11.00 am at The Hare and Hounds Pub, Downend Road, Newport, PO30 2NU on the last Sunday of each month starting from the end of May to the end of the Summer with a run organised afterwards.

Check out all the regions on our website and in CooperWorld. 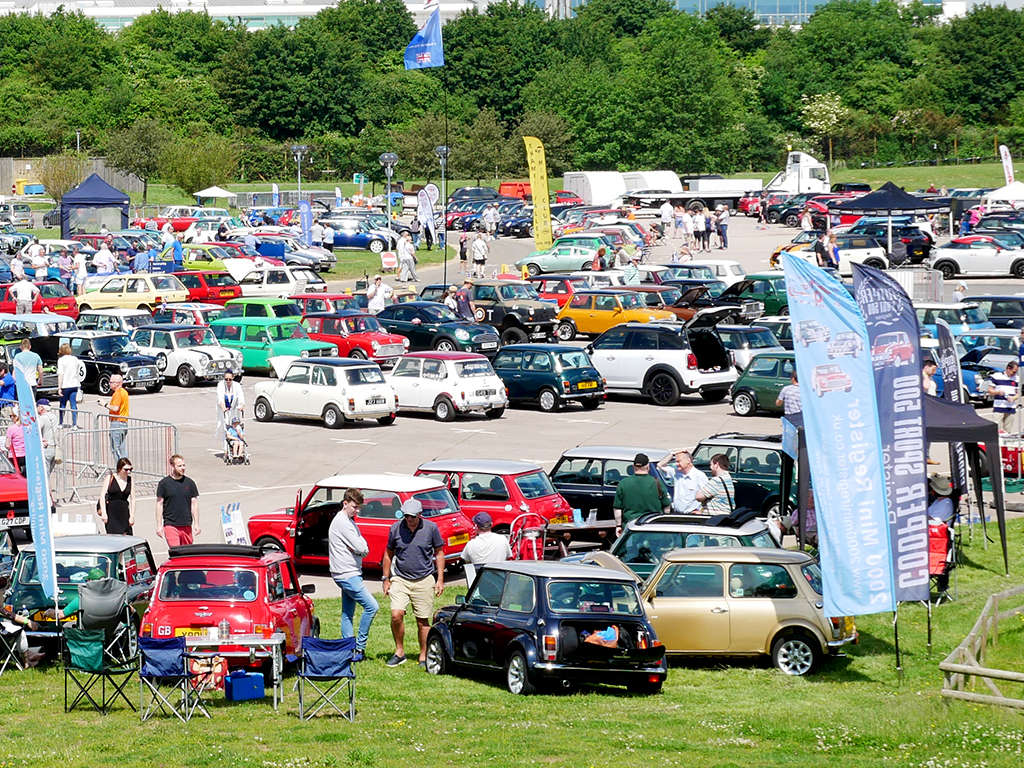 Mini Cooper Register will be making a first appearance at the British Motor Museum’s National Metro & Mini Show, supported by Peter James Insurance, which is being held on Sunday 4 August at Gaydon in Warwickshire.

This popular annual event is a little later than usual this year, but the wait will be worth it as the Museum will be buzzing with Mini 60 celebrations and, coming the weekend before the International Mini Meeting in Bristol, it should prove popular for Mini enthusiasts.

MCR’s Warwickshire region will be displaying 20 cars, details of which will be confirmed shortly.

The Museum is home to an array of historic Minis dating back to 621 AOK, the very first produced in 1959. Also on display will be the iconic X411 JOP, the last ever to come off the Longbridge production line in 2000. 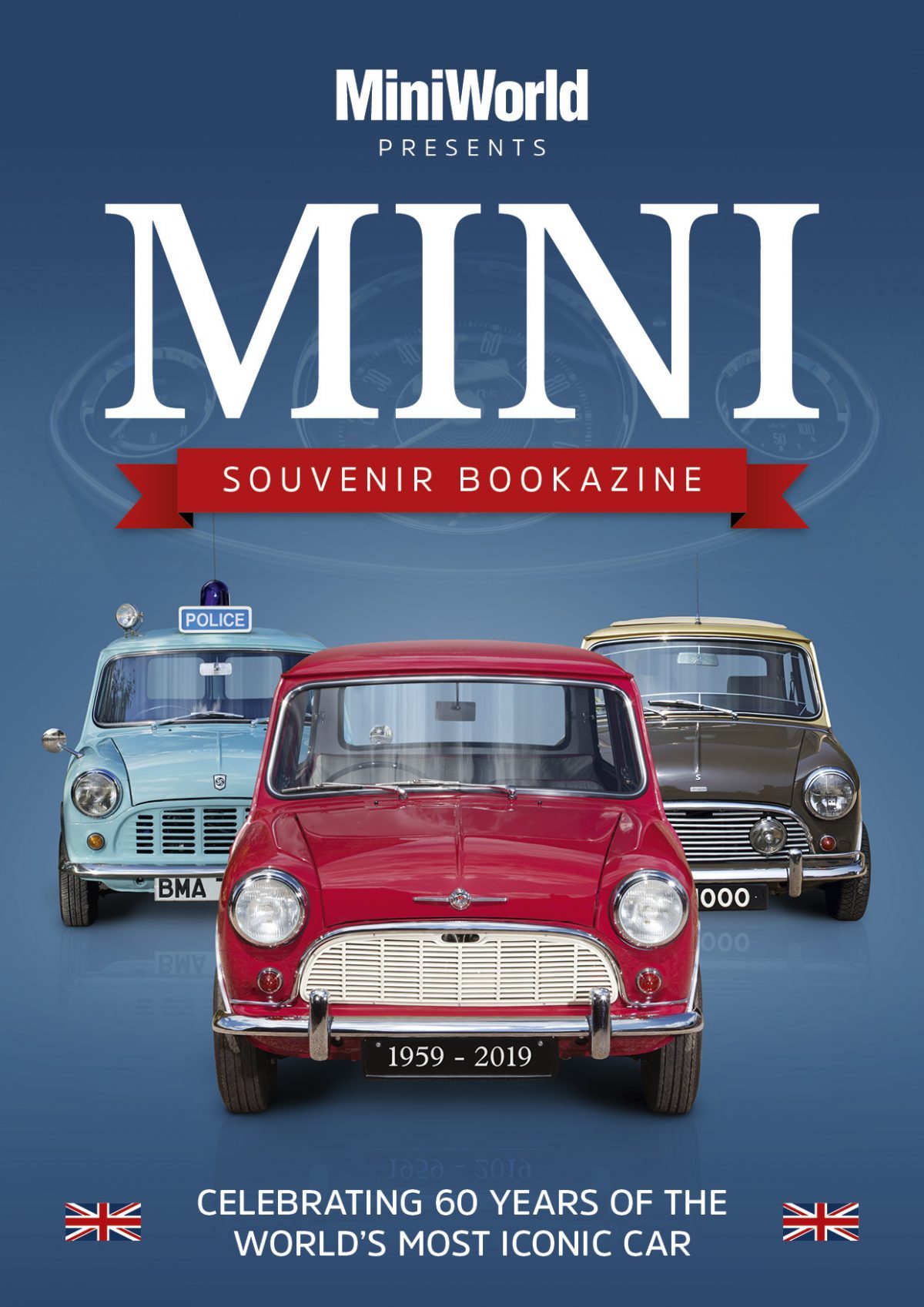 There is plenty going on to celebrate the year and MiniWorld magazine is publishing a bookazine that comes out on 18 April.

This collectors’ edition is bound to be in demand by Mini enthusiasts around the world and we will be part of this with a full-page advert.

It will have an initial print-run of 10,000 and can be pre-ordered for £6.99 at shop.kelsey.co.uk/product/BZMINI60 using the promotional code MINIP. 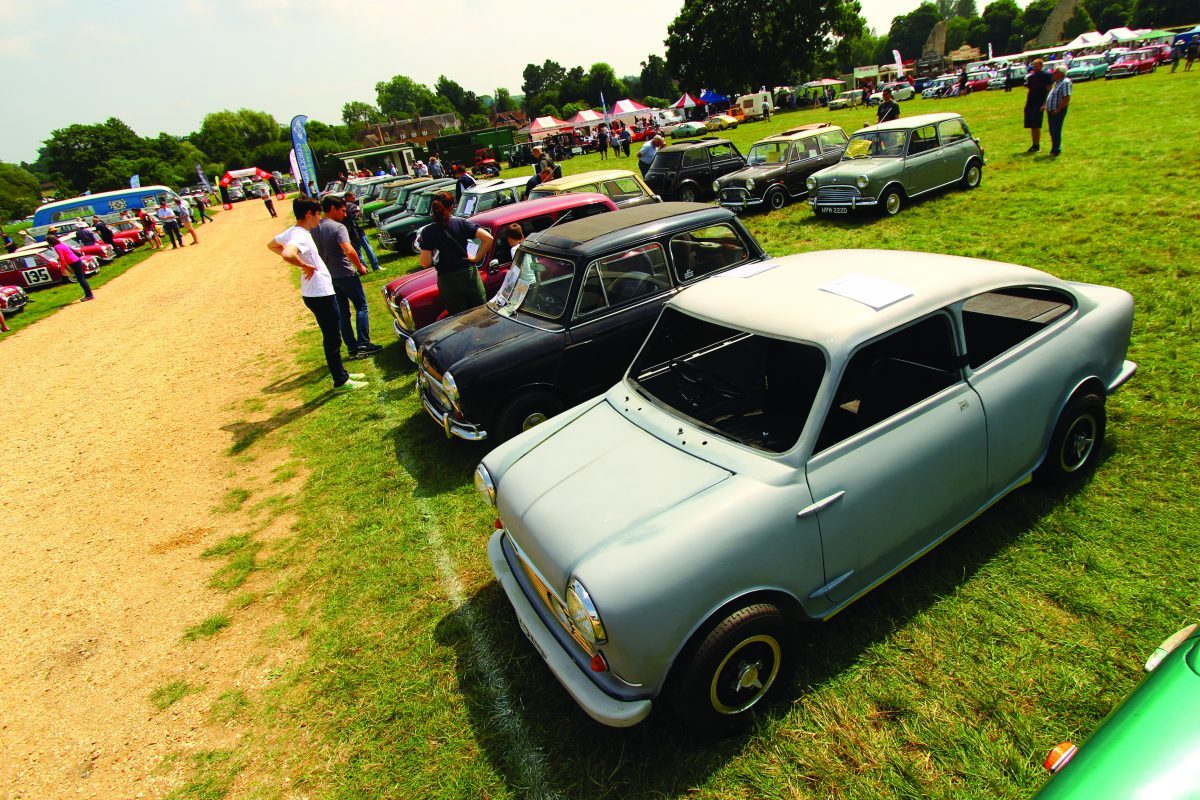 Mini Cooper Register is to play a leading part in celebrating the 60th anniversary of the iconic small car at this year’s Spring Autojumble at the National Motor Museum at Beaulieu to be held over the weekend of 18/19 May.

Sponsored by Practical Classics, the event welcomes over 15,000 classic vehicle enthusiasts from all over the world and will, itself, be celebrating 25 years of autojumble.To add to the festivities, MCR are putting together a display of 60 cars covering the entire range of Mini production models spanning 1959 to 2000.

The club’s Mini60  birthday celebrations, which run throughout the year, started at Brooklands Mini Day on 24 March and will culminate with the club’s stand at the NEC Lancaster Classic Motor Show on 8-10 November.

Highlight will be the club’s own annual event, National Mini Day, back at Beaulieu on Sunday 9 June.

HIGHLIGHTS OF THE ANNUAL GENERAL MEETING HELD ON 17 MARCH 2019

Mini Cooper Register, founded in 1986, continues to be a strong, successful club.

To be presented at the National Mini Day at Beaulieu on 9 June.