Whilst the MCR Ex-works & Competition Car Register caters for the very special cars built in period for use in international motor sport by the BMC Competitions Dept at Abingdon the Appendix K Register within the club focuses its attention on cars built to the same specification as the “Works Cars” for use in active competition today whether in historic touring car racing or rallying.

To be eligible to take part in international historic motor sport today cars must be prepared to the very tight set of rules which are set out in what is known as “Appendix K” to the International Sporting Code, published and updated annually by the FIA the international governing body of all motor sport. To compete in historic touring car racing or rallying run under the Appendix K regulations cars must also have a Historic Technical Passport which describes the vehicle and confirms that it has been inspected in detail by an acknowledged expert and found to comply with the regulations. With its Historic Technical Passport (HTP) in place a car is eligible to take part in historic races or rallies run under international rules in any country in the world where the owner will have the confidence that he is competing against other Appendix K cars prepared to the same specification within the particular class. In simple terms cars may be modified only to the same specification as cars, which competed in international rallies and races in period, in the case of the Mini this means the same “Group 2” specification that most of the genuine “Works Cars” were built to before 1 January 1966.

Genuine “Works Cars” are generally considered by their owners to be too valuable to risk on the race track or in rallies, where there the risk of damage can never be totally excluded. Racing or rallying of Appendix K cars therefore allows competitors and spectators to re-live the atmosphere of racing from the golden age of the Mini Cooper during the 1960’s whilst at the same time preserving the genuine historic “Works Cars”.

Like the genuine “Works Cars” Appendix K race and rally cars are meticulously prepared and highly tuned at great expense in order to be competitive and reliable at flat out racing and rally speeds, in some events for hours on end. “Appendix K” cars with known provenance and a history of competition success are like genuine “Works Cars” highly prized and thus very valuable, changing hands at may be three to four times the value of the equivalent good original road car.

The most obvious visual difference between an original “Works Car “ and a car prepared to Appendix K will be the modern safety equipment which must be fitted, a full roll cage, plumbed in fire extinguisher and electrical cut out with external pull switches and high back safety seats with full safety harness to FIA standards. Appendix K race cars are also likely to be stripped out internally with no trim and only a drivers seat. 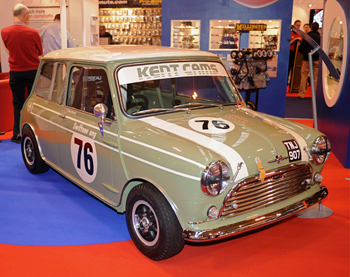 The Appendix K Register within the club, currently concentrates on race cars keeping members up to date via the monthly MCR magazine with all that is going on in historic touring car racing. Calendars of coming events where Appendix K Cooper S types can be seen racing in coming months are published at the start of the racing season and illustrated race reports and results appear throughout the summer. From time to time there are technical articles in the Appendix K register column regarding current issues in the preparation of cars for racing and compliance with the rules. Anyone interested in taking part in racing will find friendly guidance and advice from the Appendix K Registrar who can be contacted by telephone or email. 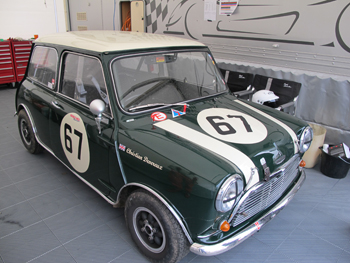 To find out more please contact our MCR Registrar Help Desk, cars@minicooper.org They will then deal with your enquiry either by responding directly or forwarding your enquiry to the appropriate registrar. Alternatively, details can always be found in the monthly club magazine, CooperWorld.’