In 2016 the Mini Cooper Register ran a Touring Assembly to Monte Carlo. It followed the lines of our previous much acclaimed Minis to Monte events, with a fully detailed Tulip road book and back up service provided by the organisers.

Mini Coopers and Monte Carlo go together like apple pie and custard. The Mini Cooper S was winner of the Monte Carlo Rally three times in 1964, 1965 and 1967, and in disputed circumstances was disqualified from the leading position in 1966 as well. So for the Mini Cooper Register to organize a week-long event called Minis to Monte using many of the classic rally stages is unsurprising and likely to attract a lot of entries.

What better way to bring together the present and the past than to have running at number 1 on the road the co-driver from the 1965 winning car, the legendary Paul Easter?  We were privileged and thrilled to have Paul amongst us, chauffeured on this occasion by his son William rather than Timo Makinen, but covering many of the same mountain roads that he traversed during his career as a works co-driver in the 1960s and 1970s.

Our run started on Saturday October 1st at the Lenham Café on the A20, venue of many a time control on Monte Carlo Rallies of yore and still used by the Monte Carlo Historic Rally in 2017.  There was a field of 41 cars (plus a sweeper and a service van) running from a 1963 Mini Cooper 997 through various Mini Cooper S’s and Rover Coopers to more modern BMW MINI Coopers. After a welcome dinner at our hotel in Ashford, the following morning we crossed to France by ferry and drove through Northern France via WWI battlefields, the restored race circuit at Reims and then champagne vineyards to our halt at Troyes. The next day took us over quiet rural roads into more challenging driving country to a night in Annecy, and from there over passes such as Mont Revard and the Col de Granier to Valence for two nights’ stay. The next day’s loop into the Ardeche was optional but most went out to enjoy another sunny day’s driving, including a stop at La Remise in Antraigues, where traditionally pastries are handed out to competitors on the Monte Carlo Rally.

Leaving Valence behind, the route took us into the Vercors, scene of a battle between French partisans and Nazis paratroopers in WWII, and then down the spectacular Col de Rousset.  A run over the Monte classic the Col d’Espreaux took us to the day’s finish in Gap. The final day’s run was southwards towards Monte Carlo but the trip could not be complete without an ascent of the famous Col de Turini, from where it was only a short run down to the sea.  A farewell dinner at the Novotel with a prize for the quiz winners rounded off the event, although many made the trip on foot to the Casino Square and the port later that evening.  Then several groups chose to take gentler routes and schedules back to the Channel to round off the event with a bit of relaxation for car and passengers.

This was the itinerary for the 1410 mile route:

Signing-on at Lenham on the A20 in Kent. 8 mile run to Ashford international Hotel for welcome dinner.

Ashford to Dover (25 miles) for ferry crossing to France. Autoroute then mostly main roads to the old Reims circuit, then through the Champagne country to Troyes hotel. Total 263 miles

Main road to Châtillon-sur-Seine then cross-country via Dôle and St Claude to Annecy hotel. Total 252 miles

Straight onto mountain roads to Chambery, over the Col du Granier to Grenoble then very scenic roads to Valence for 2 nights. Total 228 miles

Valence to the mountains of the remote Vercors, descend to Die, then more classic cols and mountain roads to Gap for overnight halt. Total 212 miles

Gap to the finish in Monte Carlo using route similar to 2014 including the Turini. Overnight in Novotel Monte Carlo with farewell dinner. Total 217 miles

for more info on the Minis to events contact 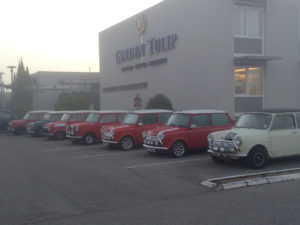 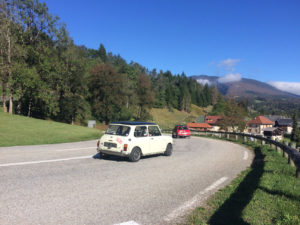 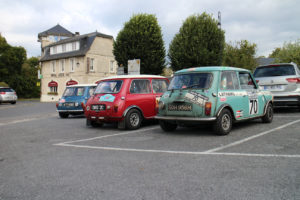 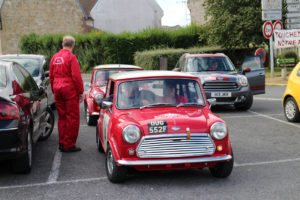 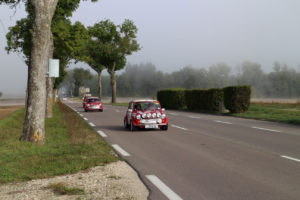 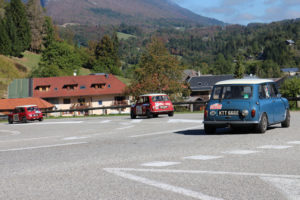 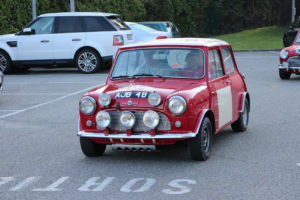 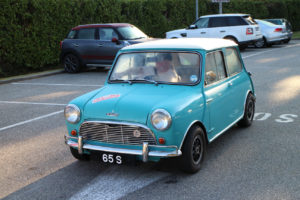 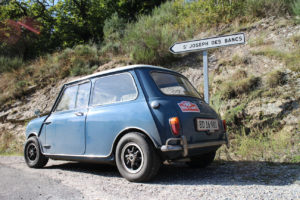 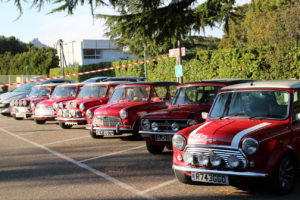 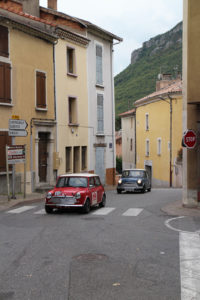 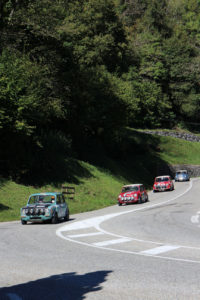