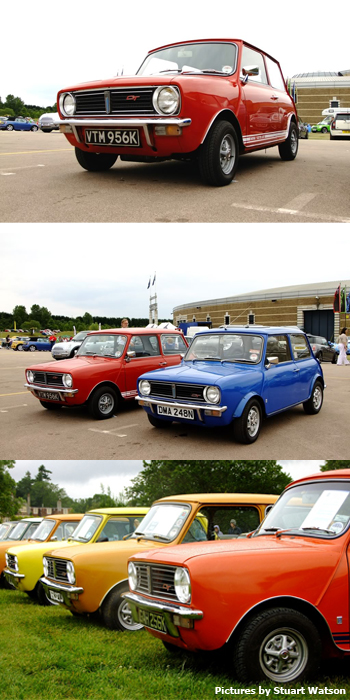 In line with the launch of the revised ADO 20 MkIII bodyshell in October 1969, a new sporting Mini was announced and it was to replace the 998 Cooper. The 1275GT got off to a slow start not realising serious production numbers until early 1970, due to labour and tooling problems. The 1275GT actually pre-dated the MkIII Cooper S by several months and is not a car that came after the Cooper S as many people think but was a car that split the continuity between MkII and MkIII Cooper S production, this may be where some of the early hostility to the GT came from.

The early 1969/70 1275GT shared some features with the MkIII Cooper S including the competition spec. Silver hydrolastic displacers although these would be replaced by 1971 with dry cone suspension in line with all Mini production (except the Cooper S which remained hydro until the end). The early GT cars were on 10inch Rostyle wheels and were fitted with Cooper S brakes front and rear. The 1275GT engine was similar in appearance to the Cooper S and although sharing bore and stroke differed significantly, the GT motor was a solid chest block with 9 studs for the cylinder head fixing and a single carburetter as opposed to the S motors chest breathers and 11 stud head and twin carbs, amongst other differences. The 59bhp of the 1275GT was well down on power to the Cooper S output of 76bhp but the man in the street and his competitor friends soon discovered the engine could be tuned cheaply to achieve similar performance to the fabled Cooper S. With the ending of Cooper S production in mid-1971 and the availibility of all the Cooper S Homologated parts now available for the 1275GT to use by the same date, the 1275GT took its place on the stage and race tracks of the world to continue the Mini legend.

The early cars of 1969/70 suffered with a problem when cruising at motorway speeds due to a final drive ratio of 3.65:1, this made the cars very noisy and stressful to drive for long periods at 70mph and a change to the 3.44:1 cured the problem and made for happier occupants all be it with a slight loss of acceleration.

The 1275GT received a major facelift in 1974 with the introduction of the XE2D2 chassis numbered cars, these were now equipped with 8.4 inch brakes and 12inch wheels and later with a wider range of options than earlier cars including new trim of velour material in various patterns including a ‘deck chair’ striped version. The later cars also had bigger petrol tanks and tinted window options also.
Between 1969 and 1980 the 1275GT production topped 110,000 and made it a serious sporting Mini in its own right and early excellent examples are now fetching comparable prices to 998 Cooper models. The 1275GT is becoming sought after, in no small part due to the MCR opening its doors to the model. As with the Cooper and Cooper S before it, the 1275GT is able to be copied and some cars that claim to be 1275GT’s are merely Clubman models with big engines fitted. The MCR is able to assist identifying genuine cars and prospective buyers should contact the 1275GT Registrar.

To find out more please contact our MCR Registrar Help Desk, cars@minicooper.org They will then deal with your enquiry either by responding directly or forwarding your enquiry to the appropriate registrar. Alternatively, details can always be found in the monthly club magazine, CooperWorld.